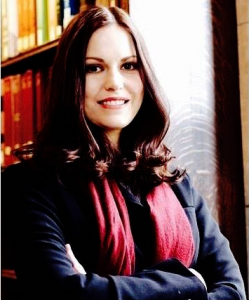 Larissa Buchholz is an award-winning sociologist of culture whose research intersects with transnational/global sociology, the sociology of markets, but also is informed by interests in theory, research methods, and the sociology of intellectuals/knowledge. She is an Assistant Professor of Communication and Sociology (by courtesy) at Northwestern University. Before joining Northwestern, she was a junior fellow at the Society of Fellows at Harvard University, the first woman elected from her discipline.

Buchholz earned four graduate degrees, including a Magistra Artium in interdisciplinary Kulturwissenschaften at Leuphana University in Germany (transl. Cultural Sciences), encompassing philosophy, art history, anthropology, and communication science; a M.A. in sociology from Stony Brook University; and  a M.A. and Ph.D. in sociology from Columbia University.

Dr. Buchholz was a contributor to Harrison C. White’s 2nd Identity & Control and has authored and coauthored a number of publications in her areas of interest, e.g. on culture and networks (with Harrison C. White, Jan Fuhse, and Matthias Thiemann), the sociology of intellectual interventions (with Gil Eyal), globalization in contemporary art, both regarding curatorial-critical and commercial circuits, on multi-scalar global fields theory, global circulation and valuation, a Bourdieusian approach to the “center-periphery” model, the uses of ethnography for studying embodiment, a comparison of the reception of French social theory in the UK and the US, the impact of Covid-19 on the art market (with Gary Alan Fine and Hannah Wohl), or Human Rights and the transformation of nation-state institutions in world society. Dr. Buchholz’s publications have appeared in Theory and Society, Annual Review of Sociology, Sociological Review, Poetics, Soziale Systeme, American Journal of Cultural Sociology, among other outlets (cf. selected publications). Her contributions have been cited by scholars on six continents.